Trip To Venice and Croatia

Trip To Venice and Croatia

The plane ride over was sort of uneventful. While I was forced to ride in steerage (sometimes know as coach) Mary did manage to get us two exit row seats near the bulkhead. These seats were just fine until we took off. Then we froze to death for the next 8 hours. There was a constant breeze coming from the exit door and there was nothing that I thought that we could do about it.. Well, Mary did do something about it. Mary was, as you all know, an ex PanAm stewardess and knows her way around planes. So she stuffed the door full of newspapers and kept on stuffing papers throughout the night to cut down the breeze. There where papers everywhere around us and we looked like two Haitian refugees on our first plane ride. The good news is that three of the flight attendants were ex Pan Am (all of them, including Mary, started flying on DC 3’s) and once they learned that Mary was one of them they treated us like kings. Free wine from First Class, a bottle of Champagne, the whole works.

We landed in Venice at about 9am and breezed through customs. No small feat given that we were in Italy, the land of “take your time” We decided to drop our bags off at the baggage storage place near the boat. When we got to the storage area it was closed so I asked one of the guards in my best Italian “Will it open?” “Si,” he replied. So we waited and waited and waited in the hot sun until I finally went back.  I referred to my Italian language guide and this time asked, “When will it open?” With a straight face he answered, “ Tomorrow.”  So much for my Italian. 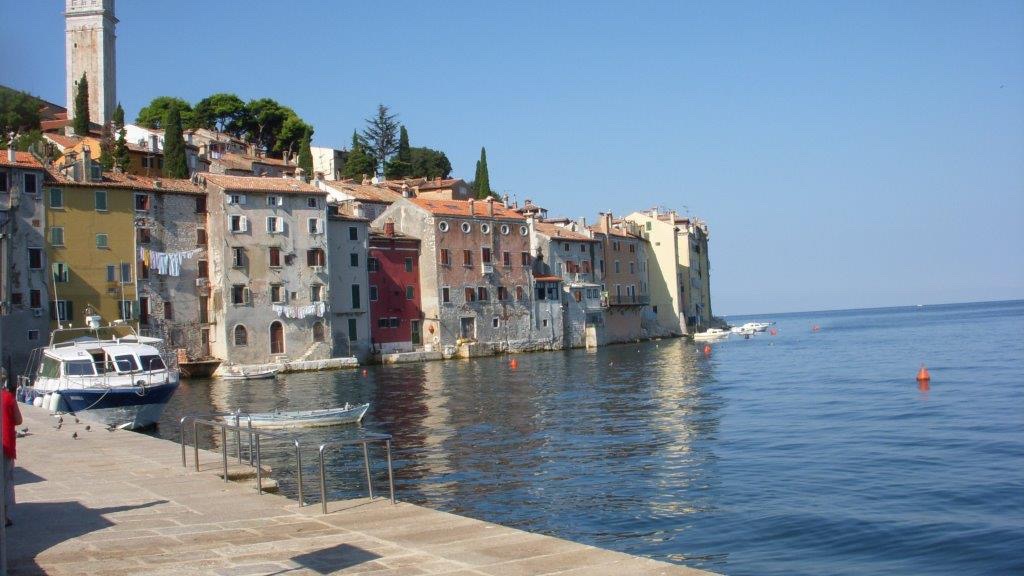 Trip To Venice With Windstar

I was happy to be in Venice. You see, my Dad, Carl Columbus Pace, was of Italian decent. According to my sister Georgia, our Dads’ great, great, great Grandfather, Luigi Pace was a noted glass blower in Venice. Mary thinks that this is where I get all my hot air from. No matter, I felt immediately at home. A spectacular place but more on Venice later.

Trip To Venice Italy With Windstar 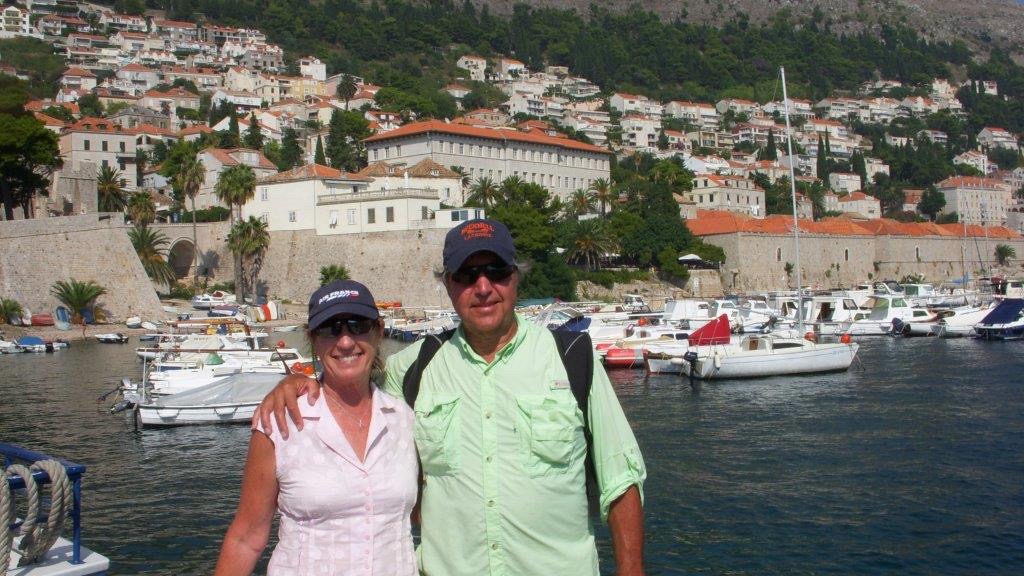 Trip To Venice Italy With Windstar

We took a water taxi (that cost about $100) to a hotel that Mary knows, dropped our bags off and walked around town. Now here’s the good part, especially for my Riverside and Old Greenwich buddies. As we were sitting by the Grand Canal having some mineral water, who walks by but Ken and Gwen Asher (friends of 30 years from town and whose daughter went to Bucknell-for you Bucknell guys). They just got off the ship that we were going on. After a few hugs and screams we decided to meet for dinner that night. 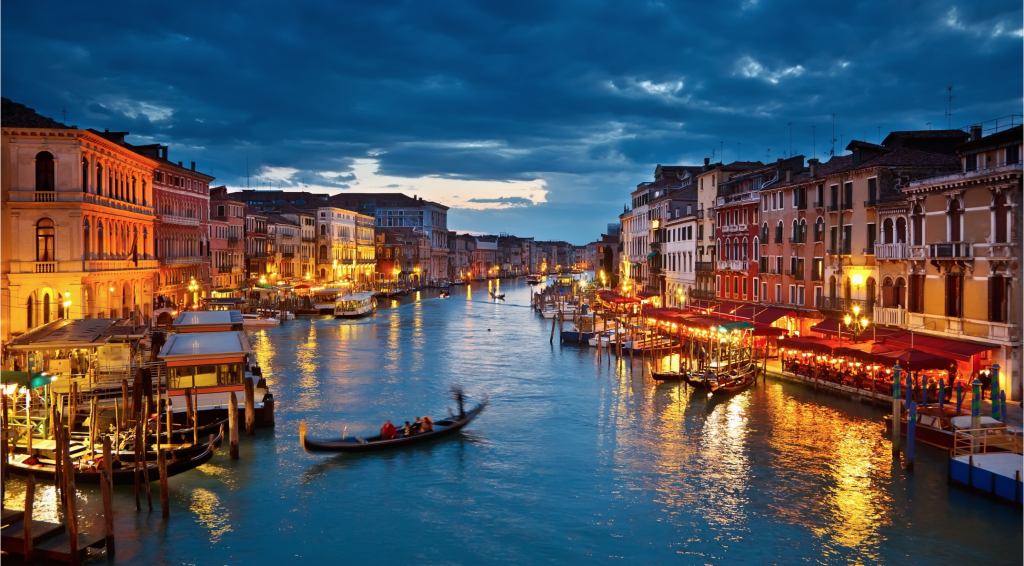 We finally headed back to the Windstar (the name of the boat) to check in. It was about 1 PM and we were beat. I couldn’t wait to get to the boat knowing that there, waiting for me, would be dozens of Swedish models, a few topless Italians and maybe a few no so good looking French women with good bodies. Mary just wanted a glass of wine. When we walked in the terminal I almost fainted. There were about 200 people in line and it looked like a combination of a geriatric ward and a Kibbutz. Nobody was younger than us and my Brooklyn instincts told me that everyone was from New York. Just what I needed. 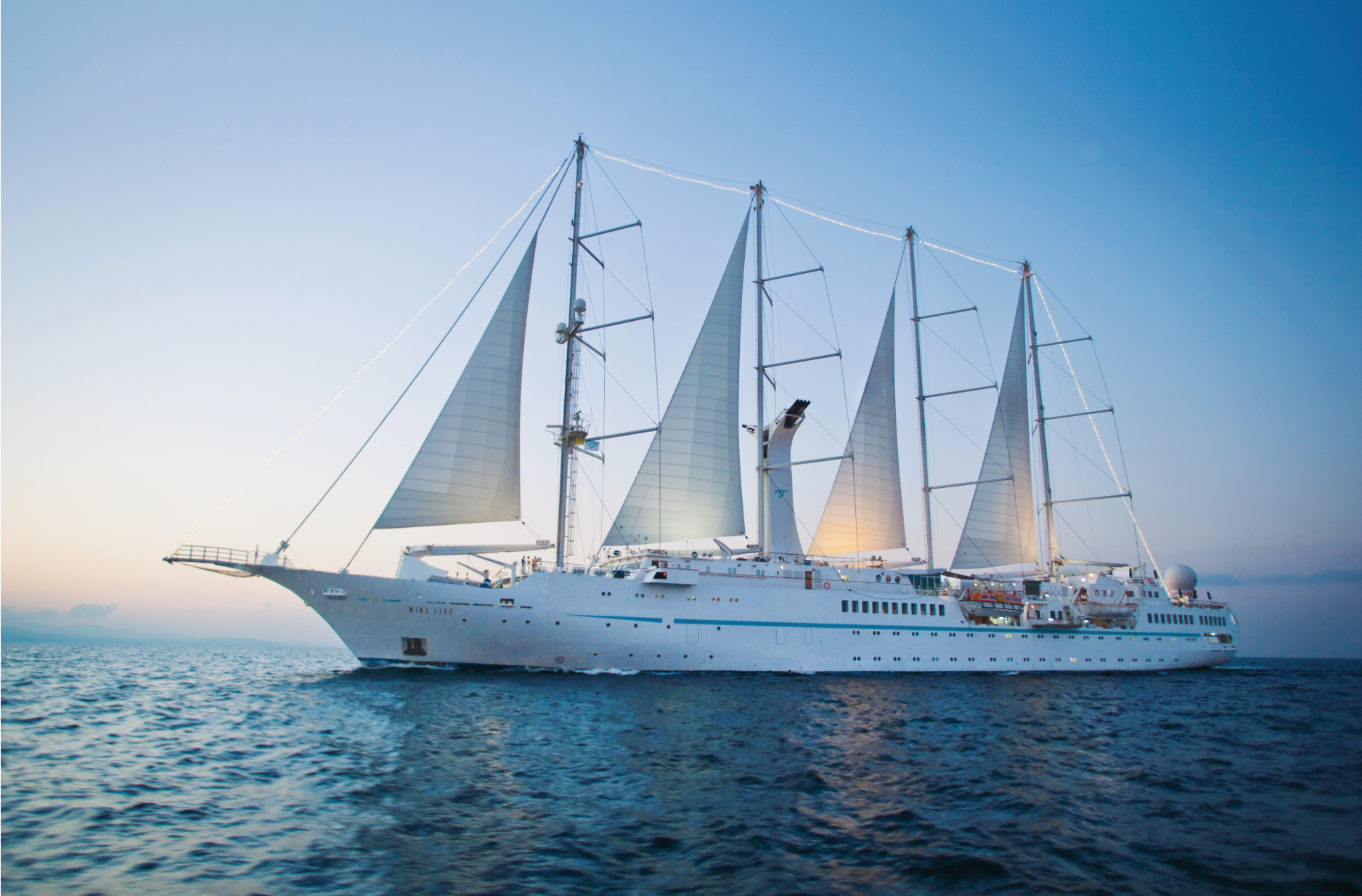 We got in line and started a conversation with a couple from LA, Steve and Jan Fishman and two women from N.Y., Hilary and Karen. Hilary was about 6’2” and looked exactly like Rene Richards (you know, the male tennis player who had a sex change operation). Her hands were bigger than mine and she had a very deep voice. Steve was a malpractice attorney and I felt the slime running down my body every time he got near me. Jan. was a pretty little blond who had a permanent smile on her face, probably from the five face lifts and 5 gallons of Botox. She was very nice and asked where we were from. Mary replied, “Chattanooga” and there was dead silence from everyone. It was as if Mary was from the Moon or from the cast of the Beverly Hillbillies. When I replied, “Brooklyn,” jubilation broke out.  Jan immediately started asking me if I knew people in Brooklyn. “Do you know Silvia Freidman?”  I said no. “How about Stan Goldman”?. Nope, never heard of him. “You must know Howard Klickman?” she insisted. Nope. Finally, after ten minutes of Jewish geography I said, “I know Richie Epstein, do you know Richie??” (Richie, as many of you know is the first person that I met at Bucknell and a life long friend) She said no and we all got on the boat.

Trip To Venice Photo of A Canal 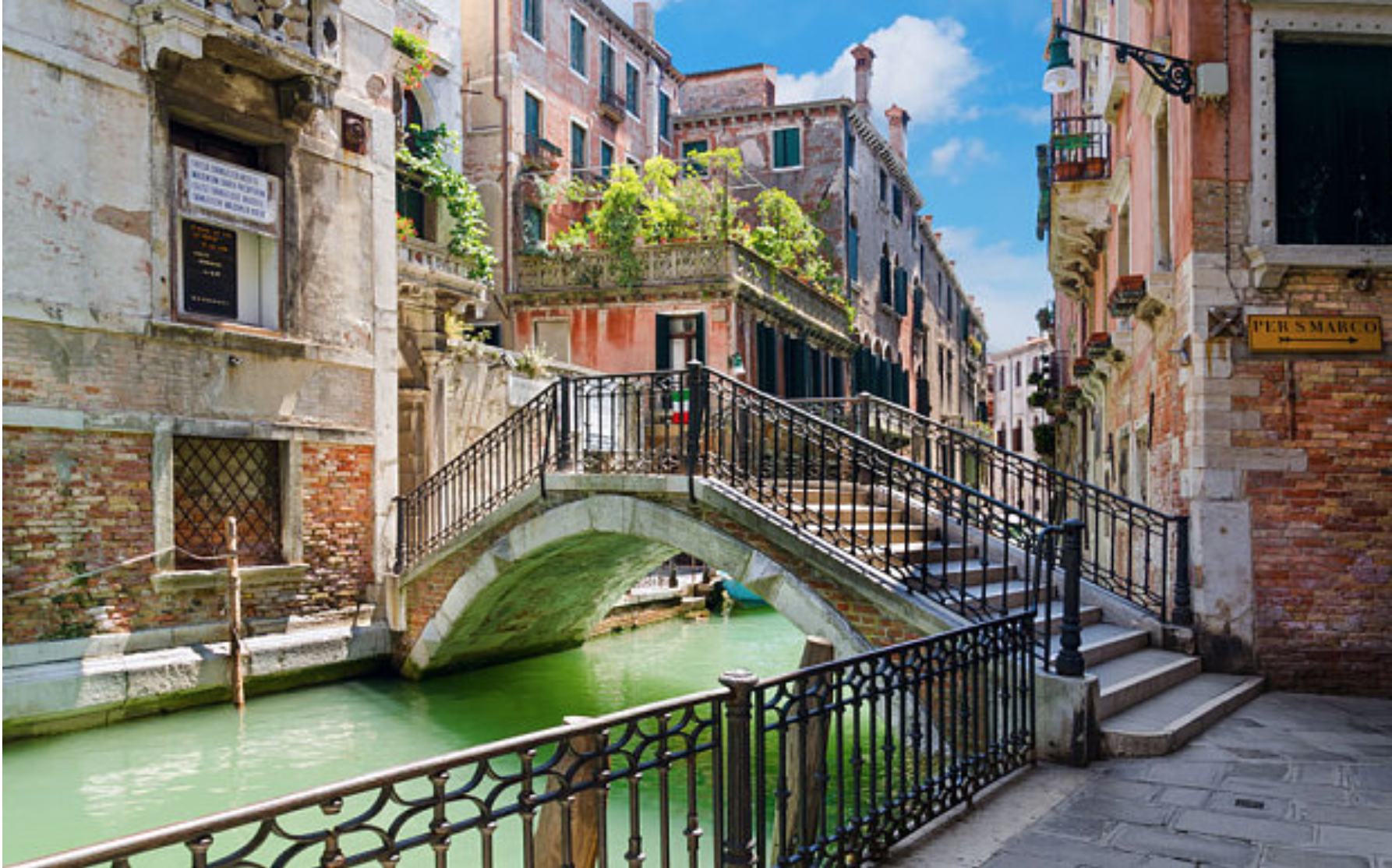 Trip To Venice Italy With Windstar Photo of a Canal

We went to dinner with the Ashers and their in-laws, Bert and Michelle. Gwen picked out a terrific restaurant in the St Marks district near their hotel.  After a great meal and a few bottles of Pinot Grigio I recommended that we go for an evening Gondola ride. Being the international traveler that I am I volunteered to negotiate the price much to the dismay of Ken. Anyone who has ever played golf with Ken knows that he is the ultimate negotiator. Heck, I spoke the language and was from Brooklyn so what could go wrong. We agreed, after some haggling with the head Gondola guy, on price of $120 Euros.

Gondola Ride at Night in Venice

Gondola Ride at Night in Venice Trip To Italy (photo courtesy of isango.com)

The ride was fantastic. I led our merry crew on a few versions of “When the Moon meets your eye lika bigga Pizza pie, that’s amore” and “O solo mio in C minor.”  Remember, I am a musician and am fairly proficient with the accordion. Anyway, our singing sucked but it was worth a few laughs. When we got back to the starting point, I somehow got talked in to paying about $200 Euros, way more than the $120 that I had agreed to.  Kenny couldn’t believe it.  We chalked it up to jet lag and a few pinos.

The next day was spent in Venice, mostly in the St Marks area. Mary insisted on seeing the Cathedral, which, by the way, mostly designed by Syrians. Look it up!!!. The line was 200 yards long and since I do not do lines or churches, I left Mary to do a little exploring. I went off to find an art museum or two. I knew that I needed to keep my friend Pam Koob, the art historian, happy.  Plus, I was an art major at Bucknell and knew all this stuff. 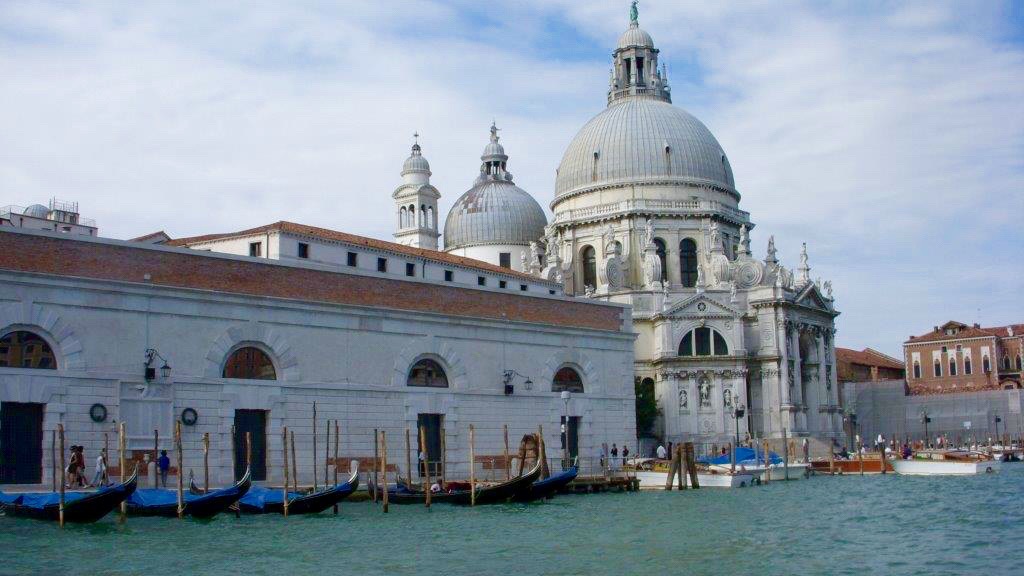 Trip To Venice Italy With Dick Pace on Windstar

I have never seen so many tourists in my life in one spot. Groups of Germans, Japanese, Italians, French and, yes, Indians. You could easily tell who was who because the Germans and Japanese were in orderly single file lines while the Italians and French went off in every which way yelling at each other and anyone who got in their way. I joined up with the Indians for a while. I asked one how he liked Venice. He replied, “It is very, very, very nice and not so crowded”   Not so crowded???   We could hardly walk. I then figured out that Venice must look good to him compared to Calcutta.

I never made it to an art museum. Sorry, Pam. Instead I sat down on a canal and had a vanilla gelato. For lunch Mary and I went to a wonderful neighbor bistro near our boat.   We are now headed to Slovenia and Croatia where, pristine waters and nude beaches await us. I guess there are also a few churches and museums there as well. I will send pictures guys.

This site uses Akismet to reduce spam. Learn how your comment data is processed.

Copyright All Rights Reserved Adventures of Dick Pace © 2018
Contact Us

Thank you for stopping by. I'm not around right now. But you can send us an email I will get back to you, asap. Kind Regards, Dick